Vietnam is a long and thin tropical country which creates a great condition for the whole countries to have many specialties. Vietnam is divided into 3 main regions: North side, Central Side and South Side. The diversity in geography, culture, ethnicity creates the unique features in the cuisine of each region. So in this article, I will explain to you the differences in Vietnamese cuisine – northern, central and southern.

In Vietnam, food is tended to create a harmonic taste which people normally combine many types of ingredient.

The unique flavours of tropical food will be mixed together to create a combination of taste, which normally based on yin and yang.

In a typical meal, Vietnamese don’t eat just one or two dish. People will try every each of everything, try to maintain the balance.

In cooking, the utilization of the fish sauce – the natural MSG and other type of fermented fish, shrimp sauce also create many differences in Vietnamese cuisine when compare to other countries.

The feature of using chopstick and dipping sauce together express the community and sharing mindset in Vietnamese culture.

The diversity in geography and ingredient, culinary culture create many differences in Vietnamese cuisine.

In general, due to ancient traditions with poor agriculture, northern cuisine before was less popular with the main ingredients of meat and fish.

Many people highly appreciate Hanoi Cuisine for a while, claiming that it represents the most representative of the North Vietnamese culinary elite with noodle dishes, vermicelli noodles, bun cha, gifts such as Com, banh cuon Thanh Tri and special spices such as Belostomatid essential oil, Hung basil leaves. 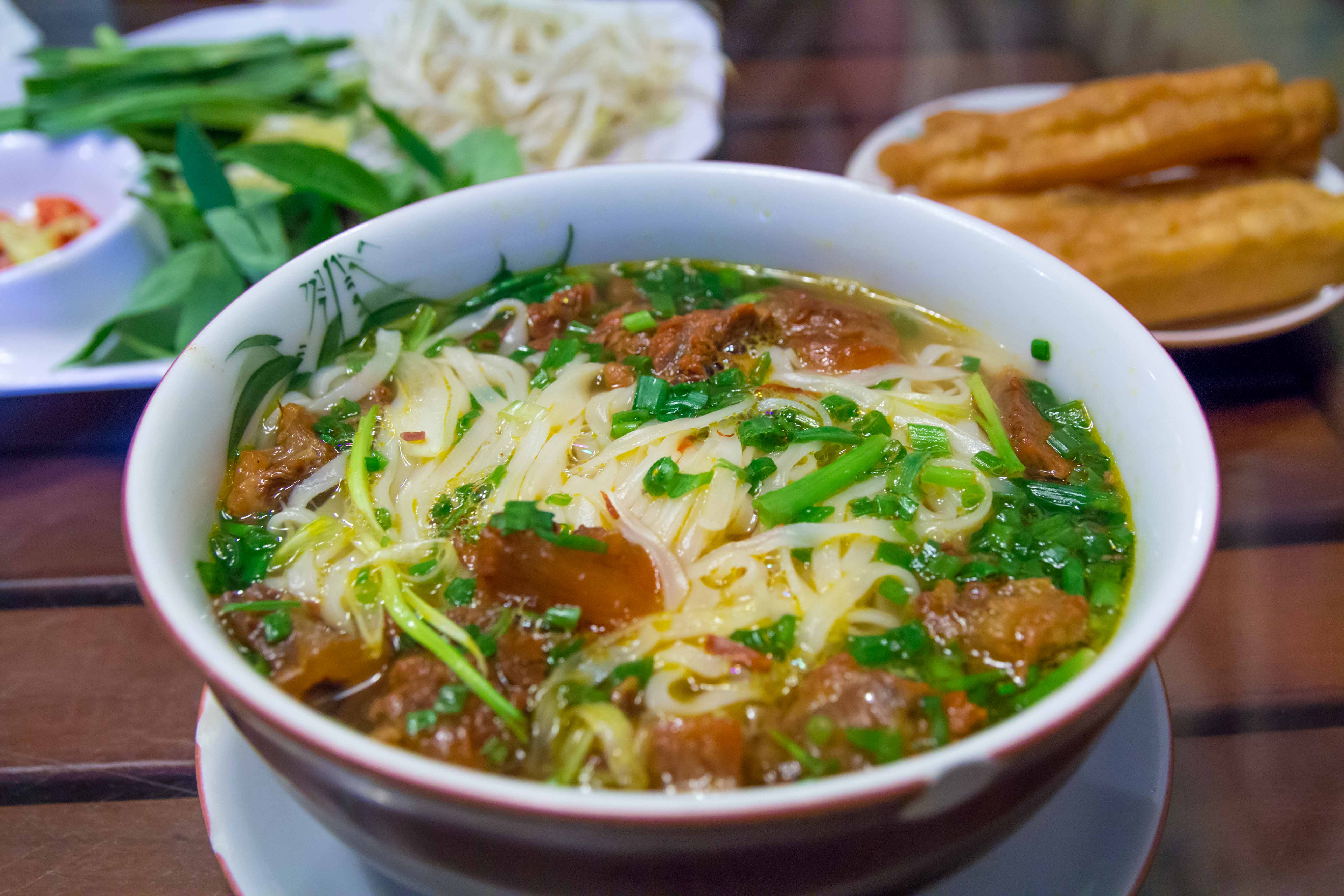 Pho is a type of Vietnamese soup, typically made from beef stock and spices to which noodles and thinly sliced beef or chicken are added.
For extra flavoring, you may add any or all of the condiments found on virtually every restaurant table in Vietnam – from red chili and lime to soy sauce, hoisin sauce.

Bánh cuốn is made from a thin, wide sheet of steamed fermented rice batter filled with a mixture of cooked seasoned ground pork, minced wood ear mushroom, and minced shallots.

One of my favorites – Bun Cha

Central side food with all its unique characteristics is expressed through its distinct flavors, more spicy and salty dishes than Northern and Southern food.

Especially, Hue cuisine is influenced by royal cuisine style, so it is very sophisticated in processing and presentation. On the other hand, because the locality does not have many products, royal cuisine requires a large amount of dishes, so each type of ingredients is processed in a variety of different dishes.

Cao lầu is a regional Vietnamese noodle dish, from the town of Hội An, in central Vietnam’s Quảng Nam Province. It typically consists of pork and greens on a bed of rice noodles made from rice which has been soaked in lye water, giving them a characteristic texture and colour that sets the dish apart from other Vietnamese noodle dishes, including others from the same region, such as mì Quảng.

It tastes so light but is so complex at the same time. Ty Cao Lau, just off Phan Chu Trinh Street, is a famous stand that opens daily from 4:30PM to late at night. It is run by a man, Mr. Ty, I assume, who has been making cao lau for the past 20 years, so you know you’ll be getting a good dish. Once you cao lau…you cannot go back?

Southern cuisine, which is heavily influenced by Chinese, Cambodian, and Thai cuisine, is characterized by the addition of sugar and coconut milk (coconut milk and juice). This culinary background also produces a multitude of dried fish sauce (such as fish sauce, beef sauce, ba kham sauce, etc.).

Southern cuisine also uses more seafood and brackish seafood than the North (all kinds of fish, shrimp, crabs, sea snails), and is very special with rustic dishes, typical of a time when opening the realm.

Bun mam is one of the specialty dishes of western South Vietnam. Bun mam is originated from Cambodia, cooked from fermented fish sauce. It is often cooked with cá linh or cá sặc, which are kinds of fish in the Western Southern of Vietnam (Tra Vinh and Soc Trang provinces).

Getting around by bus in Ho Chi Minh...

Mobile apps in Vietnam that you should install...

Exotic food in Vietnam – where to try...

What is the best time to visit Ho...

Hi, my name is Bao. I'm a young Vietnamese food lover, experience holic, basketball lover. I would like to meet new friends, share my story, introduce the beauty of the people, culture, cuisine of Vietnam